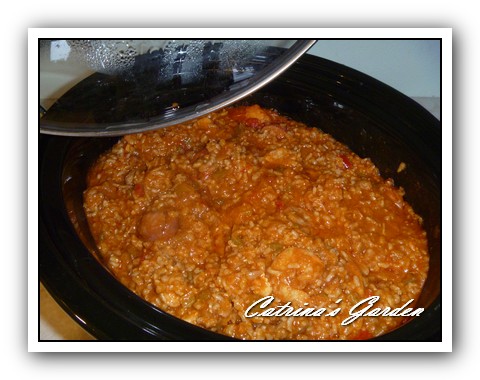 My bad, I should have got this posted a few weeks ago. We made this dish on Fat Tuesday. I have made Jambalaya many times since I first learned how to make it from a little Cajun lady at a “cooking school” in New Orleans. This was really a lot of fun, and now that I feel like I know how I’m going to send the pictures that I took for this piece, and see if I can get my “degree”. I’ll keep you posted on that.

The theory behind Jambalaya is that you are using up your left overs. This is why it frequently, but not always, has more than one meat in it. Isn’t it really like Cajun Casserole? That was always the idea for the casseroles in our family. Use up the meat and veges in the frig, but have them taste different than they did before.

Jambalaya has influences from France, Africa and the Caribbean. The Cajuns were from Brittany and traveled through France, and then on to Nova Scotia, where they were actually the first white settlers; 15 years before the Mayflower. When the protestant Brits moved in, the Catholic Cajun people were forced to move again; this time to southern LA. They were not the only French speaking people in LA, the Creoles also settled there after first living in the Caribbean. Creole food has some similarities, but is distinctly different.

From what I can tell (as a non-Cajun) it’s all about the Roux. The herbs are important too, but really, the Roux is what gives it the color. The whole idea of the Roux originated with French cooking, where a much lighter “blond” roux is used. If you keep cooking your Roux you will come to “peanut butter” which is what is desired for Creole dishes. You’re not done yet. Keep cooking until you reach a Cajun Rue which is a deep caramel color. This is what gives jambalaya its beautiful characteristic color; the darkest Roux. 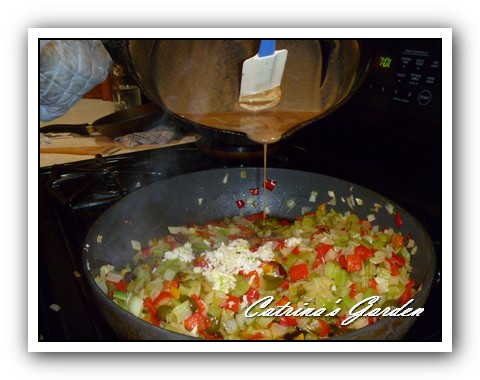 Two things you should know about Roux. Whatever you do…no matter how good it looks…don’t taste it. If you do it will be a very long time, if ever, before you can taste again. This is essentially hot oil, so be really careful. Next…this stuff needs your undivided attention. You have to stir CONSTANTLY. Don’t answer the phone or try to direct the kids’ activities while making the roux. Sometimes it seems like the color just won’t turn (maybe you don’t have your fire hot enough), but then turn your back and the stuff is a burnt mess. Burnt roux cannot be “fixed”, just start over.

Basically you take a stick of butter and a cup of flower and slowly stir the flower into the melted butter until smooth and darker than peanut butter, kind of the color of caramel. You can adjust the amounts if you like, you can use different fats like bacon grease, lard, olive or other oils, or pan drippings., I have tried most of these and as you would expect, the ones that are worse for you tend to taste better. I try to use half olive oil. 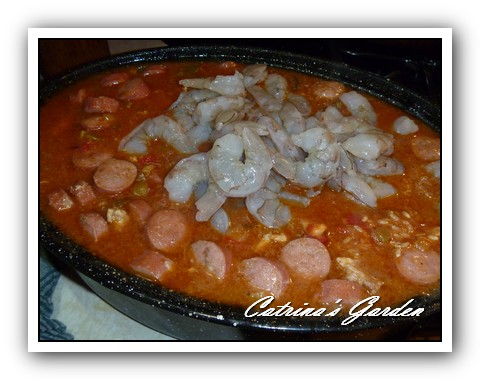 You’re going to have quite a few pans on the stove, as you want to get different parts of the dish going and then mix them together. If you use shrimp or crayfish you should wait to add that until near the end or it will get overcooked and mushy. If you want to really add to the flavor, you can peel them and then boil the shells and bodies. Strain, to make a nice seafood stock to add to get the rice cooked. I add the bay leaf to the stock and then remove them from the final dish. Some add crushed bay leaf to the spice mix. 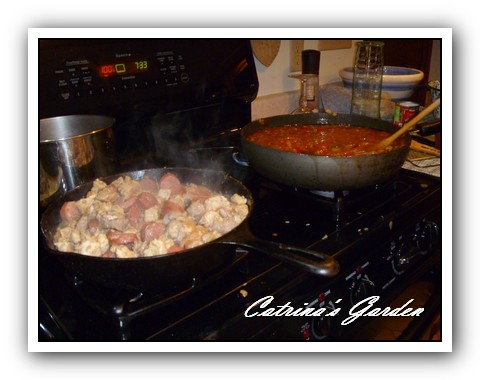 You will want too brown your meat. I didn’t always do this but now I think it is one of the most important steps. It seals in the juices and keeps it firm so the dish doesn’t turn mushy. Mainly any sausage, pork or chicken that you use should be browned. You can add any drippings that you have to your roux. The traditional sausage to use is Andouille [ah(n) doo’ ee]. Really though; in the spirit of using up the left overs, you can use what you have. We found this time around that it is really good with kielbasa. 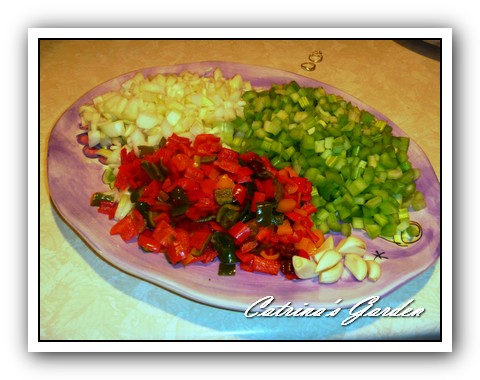 Traditionally onions, celery and peppers are used. This is lovingly referred to as “the trinity” while the primary flavoring ingredient; fresh garlic, is called “the pope”.  These can be cooked together until the onion is translucent before adding to the dish. The Pope should be added near the end of this phase so that it doesn’t burn. You will want to chop them pretty small for this dish. So, how many? It really doesn’t matter, I think more is better, but for a big batch (2 cups of rice) I would use at least 2 onions, 2-3 large peppers, and a package of celery or a 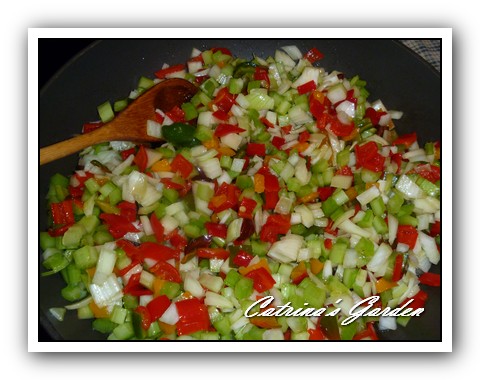 little less. After the veges are softened add your tomatoes. Of course your fresh garden tomatoes will always be best, but you can use canned frozen or if you must sauce or paste. You may want to blend or peal your tomatoes if you are using fresh to avoid the curled up skins.

Now for the Spice; it’s not wrong to use a pre-made Cajun spice. There are lots of great ones out there. My favorites are Joe’s Stuff and Ms. G’s. If you want to make your own, why not just mix up a big batch and use it on lots of different things, rather than just making it for this dish. I can’t give you exact amounts, but 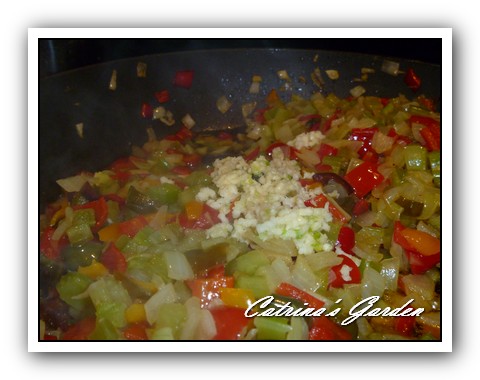 here are some of the spices that you may want to add:  salt, thyme, basil, oregano, cayenne pepper (how much depends on how hot you like it), ground Ancho pepper, really any pepper flakes (we grow tons of different peppers and all are good), cumin, freshly ground black pepper and or white pepper, paprika, and garlic powder (you can leave this out if you use lots of fresh garlic).

Worcestershire sauce and/or hot sauce are sometimes also added, but I like to just put these on the table and let the eater add them to taste. 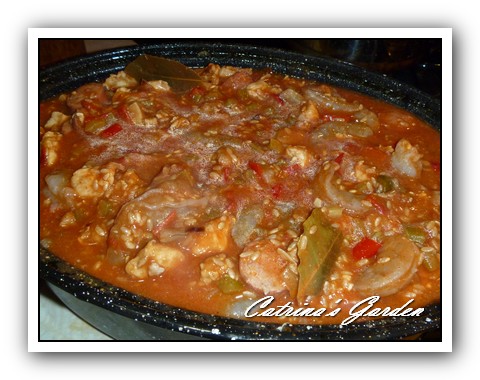 Slowly add some of your stock to the roux. Once you get it thinned a bit, then add it to the veges and meat, and season with your seasoning to taste. You can always add more after it cooks a bit. Add the uncooked rice and some more of your broth. Most often Jambalaya is cooked in large pots on the stove or even over the fire, but I have also had good luck taking the big Dutch oven and sticking it in the oven. Check and stir from time to time. Add more broth as needed until the rice is just right. 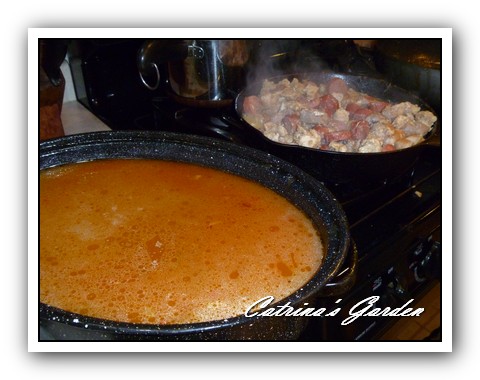 Serve with fresh scallions, if you have them…and corn bread; ya, that’s a must but I’ll have to talk about that in another blog.