I had heard this term before moving “up north”. But when I got here one of the first friends that I made used this as her “computer name” so I became more accustomed to the name.

This diminutive little pansy known to all as Jonny-jump-up, love in idleness or herb trinity is call heartsease because it is said to mend a broken heart. Shakespeare makes reference to this in A Midsummer Night’s dream. Oberon dispatches Puck to gather the “little western flower that maidens call Love-in-idleness”. Cupid’s arrow falls upon the plant that is “before milk-white, now purple with love’s wound”. Oberon and Puck are able to control the fate of other characters in the play by using heartsease; “on sleeping eyelids laid, will make or man or woman madly dote upon the next live creature that it sees.” 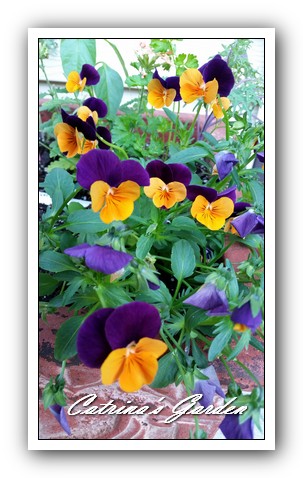 The scientific name Viola tricolor tells us it is from the family violaceae (the violets) and tricolor because it is usually purple yellow and white. Violas are a close relative, but all of our wonderful longer lived pansies were developed from this plant. Pansy comes from the French – Pensee meaning thought or remembrance. Here is why in Shakespeare’s Hamlet Ophelia says “There’s pansies, that’s for thoughts”.

Some say all pansies can be called heartsease, but viola tricolor is the original one.  Pansies are among our edible flowers and are sometimes candied on fancy deserts, frozen into ice-cubes or thrown into salads. 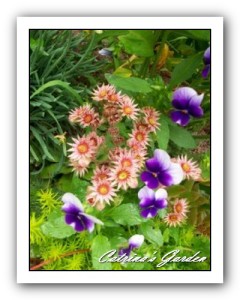 They have been used forever as a mild treatment for pertussis and bronchitis due to their expectorant properties; cystitis, polyuria and dysuria due to their diuretic properties, and they are also a mild laxative, so don’t eat too many of these little cuties on your salad. They also contain salicylic acid, salicylates and rutin, so they have anti-inflammatory properties and can be used to treat gout and rheumatoid arthritis.

Used as a compress or ointment they treat eczema, psoriasis and acne. Although they are usually used in combination with other plants by herbalists, this is truly an amazing little plant.

So, what is the secret of growing Heartsease? There is none! Just ignore it and it will “jump up”. The fancier pansies will self-sow too, and will sometimes, but not always come true to seed. Of course you can find them at any garden center in early spring, but if you want a certain variety you may want to consider growing your own. If you do, keep these tips in mind; first start with fresh seed. Start early, I usually try to get mine going as soon after the holidays as I can.  They take 6-8 weeks to be large enough and can be set out quite early, as they are frost tolerant.  As with any seed starting use a soilless mix and keep them moist with bottom watering. But this difference with pansies; they should be kept cool (like about 65 degrees). No bottom heat for these darlings.  Another difference from many flower seeds is that they need darkness to germinate, so cover them with a little soil and throw the daily news on top of them until they sprout, then bring them into the light. Lastly, my favorite tip, grow them through spring as most people do, but then when summer comes and they start getting leggy and not so beautiful, don’t pull them out. Instead cut them waaaaaay back. They will all but disappear under your other flowers, but then in fall they will jump-up again for 3 more months of cuteness.

Walter Savage Landor says it all in this little poem.

There is a flower I wish to wear,

But not until first worn by you,

Heartsease of all earth’s flowers most rare;

Bring it; and bring enough for two.

Some may call this plant a “lawn weed”. But how can you not love a cute little plant that requires no care and heals a broken heart?

Click here to read about Pasque Flower for Easter

Try this link to read about Early Spring flowers