Care and Culture of Hosta 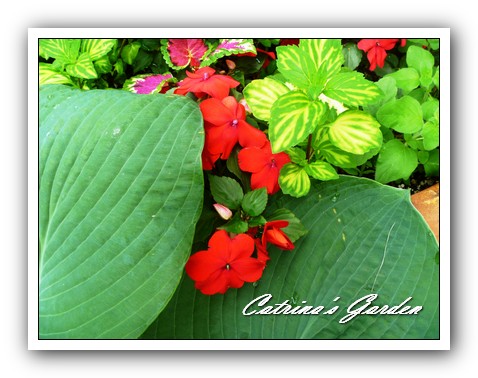 Hostas are one of the most popular perennial plants grown in our shade gardens. They are tough and reliable in both shade and partial sun. Many people think of them as simply the common plantain lily that we see so often which is green or the standard green and white that is sometimes called “Silver Crown”. But the hostas of today are so much more. The variety of foliage is enough to make your head spin. In the old days we used to cut off the little ragged purple flower scapes or racemes, but many hostas today display fragrant blooms from early summer to fall depending on the cultivar. The trumpet shaped flowers could be lavender, white, bicolor or sometimes a little bluish. 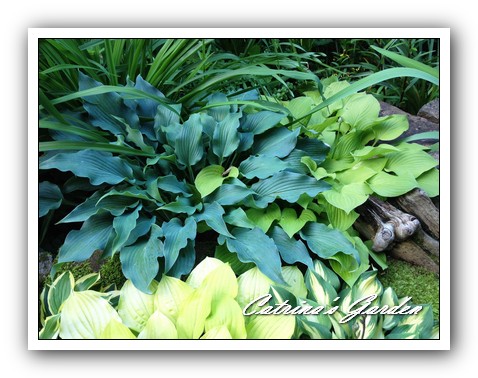 People sometimes ask me to give them a name for their unidentified hosta and some varieties are distinctive enough that I can, but with over 3000 named varieties available, and more being introduced each year, knowing them all would be a real trick. The foliage may be all shades of green, yellow, gold, chartreuse, white, cream or bluish. Many are variegated forms with more than one color. The plants may be huge or tiny and the form may also differ from mounding to creeping to vase shaped. Some even tolerate some sun. So there is likely a hosta available for nearly any landscape situation. 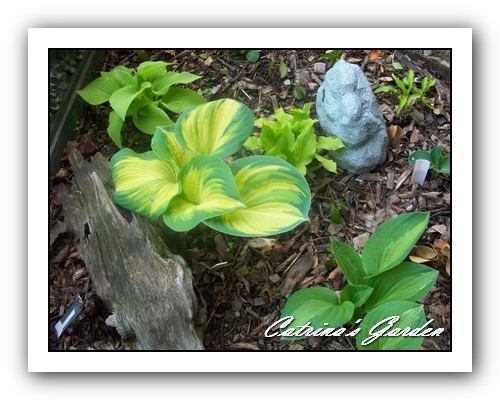 Hostas are generally hardy in zones 3 – 9. In zones 8 and 9 it is best to give them a little more shade. It is possible to have them in shade that is too deep. They do need some light to do well.

Hostas grow by underground stems called rhizomes and then they produce their beautiful foliage unfurling the leaves from points called “eyes”. In order to grow a hosta you will need some of the crown tissue and at least one eye, preferably with a nice tangle of roots attached. In spring when your hostas are coming up, be careful not to step on the emerging eyes. Remember, all of the leaves for the whole year are contained within them and if you damage them at least the early season leaves can be deformed. 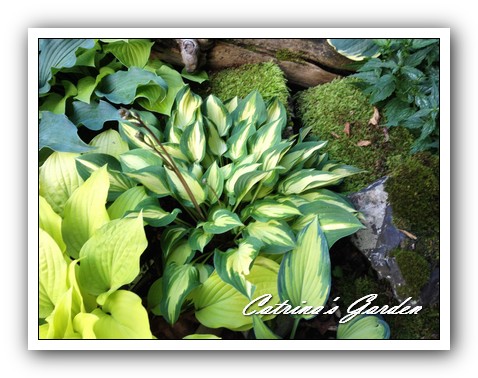 Hostas that you order from Catrina’s Garden will have at least 2 nice eyes for the really large ones and at least 3 eyes for medium, small and miniature hostas. It is a matter of what we can fit in the box.

Space your hostas according to their spread at maturity. I have to admit to putting them too close. This is easy to do when they are small. I never seem to have enough garden space. You could move them when they get too close, which is what I do, but they really don’t love to be moved too often, and if you don’t get to them when you planned to, the big ones can shade out the others. 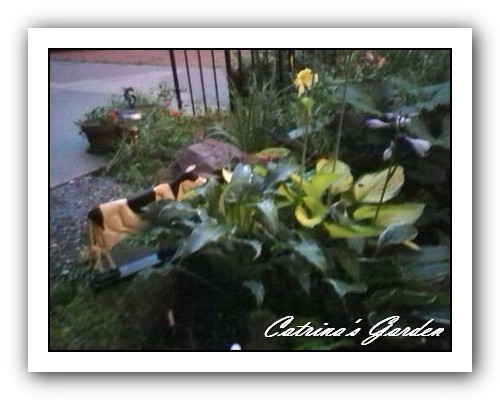 They ideally prefer rich, well-drained soils amended with organic matter, such as compost or rotted animal manure. Hostas do best on raised beds. They will not tolerate soggy conditions, especially during the winter months. This will cause them to rot. This is the ideal situation; however, these are tough plants. They will live in poor or dry soil but they will not grow as fast. They tolerate clay, sand and even a few rocks but will reward you if you amend the soil as mentioned above. 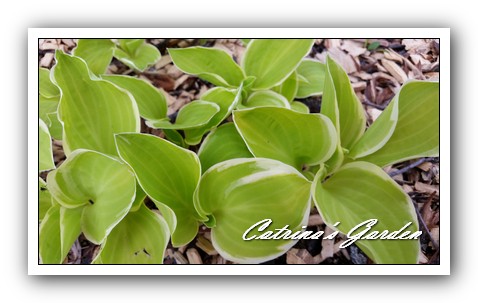 Plant your hostas by digging a hole as deep as the root ball and at least twice as wide, work up the soil well so that they have nice loose soil to spread out in. Backfill and tamp it down enough to remove air spaces. The eyes should be just peeking above the ground but the crown and roots should not be exposed. The ground should be level with the surrounding soil not sunken or mounded. It is okay to place a ring of soil to keep the water from running off when you first plant. 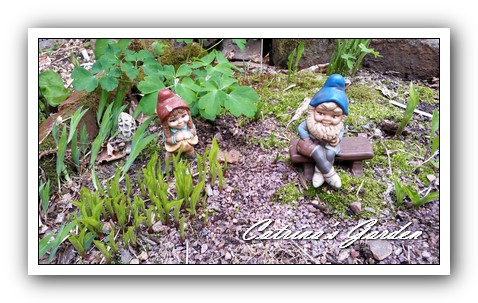 Water well…especially when they are newly planted. They are pretty resilient once they are established, but may need some supplemental water in drought conditions. They grow the fastest when they are evenly moist but not soggy.

Dividing is not necessary for the health or vigor of the plant. It is only necessary if you want more hostas. Planting, transplanting and dividing should be done in early spring when the leaves begin to emerge. Dividing can be done either by cutting away a section of a clump with a sharp shovel or by lifting the root mass and separating it by hand. It is probably better to opt for the second method so that you don’t accidentally chop off some of the eyes. Separate the plant so that an “eye” is 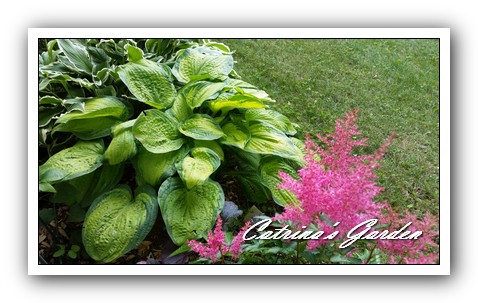 present in each division. You may need to use a sharp knife or large forks to pry the divisions apart. Clean your tools between plants please. Very small divisions tend to establish slowly so that is why it is better to keep more than one eye together. Most hostas can be divided in four to five years, or sooner depending on the vigor of the clumps. We don’t recommend dividing the large hostas after they have leafed out completely. You will end up breaking them up. Hostas do grow a few more leaves throughout the season but not a lot like some other plants and they need their leaves to store energy for next year. Small and miniature hostas can be divided until about mid-season, but even these we do not recommend transplanting in fall. Hostas really need to be established to survive the winter in the north. For this reason we only sell large hostas in spring and other hostas not after August. 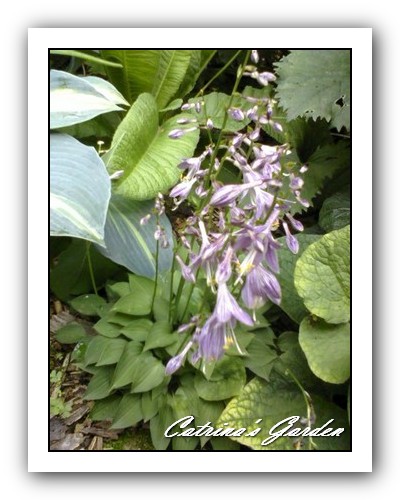 Hosta Venusta with Touch of Class, Drumstick Primrose and Brunaria

Light requirements can vary with each cultivar. Some require full shade so that leaf scorching does not occur while others (usually the yellow ones) can tolerate more sun. Hostas will actually grow faster with more sun. I usually tell people that if it doesn’t look good where you have it, then move it to a shadier spot. Getting too much sun won’t kill the plant it just won’t look as nice. You may also notice that your hostas may vary in color (the same cultivar) depending on how much sun they get. You may notice that some hostas, especially the dark blue ones have a waxy or powdery coating. This helps protect the leaves from sun scald. You can’t help the rain, but you can avoid getting water on the leaves when watering. 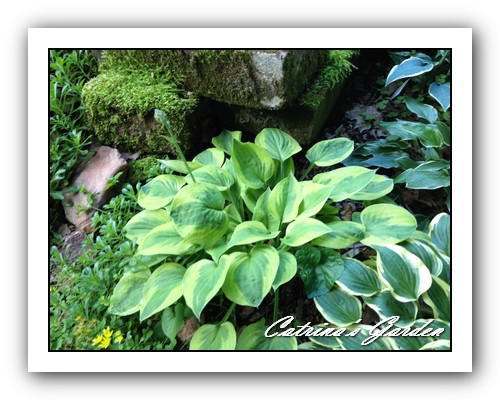 Hostas grow best in fertile soil. As always, it is best to test the soil with a soil test, but if you wish to use fertilizer a general rule is 1/2 pound of 10-10-10 per 100 sq. ft. at planting or when growth emerges in the spring. If you must use this avoid letting the granules set on the leaves or on the base of the crown. This will burn them. Here at Catrina’s garden we prefer to use compost. Add some to the planting hole along with the soil that you removed and you can also top-dress throughout the season. It is best to put the compost around the plant so that it can leach down to the roots and not directly on the crown in order to avoid rot. You could also consider using organic fertilizers such as blood meal, bone meal, composted manure, and fish emulsion. Nutrients are released more slowly. Stop fertilizing in August. The plants should be hardening off at this point and getting ready for winter, not putting on new growth. 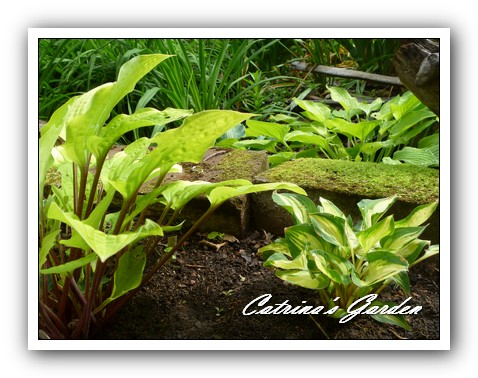 Organic mulches, such as shredded bark, shredded leaves, or pine needles, will help to conserve and retain the moisture needed for hostas to succeed. Apply mulch after the soil warms in late spring to early summer to maintain a 2-4 inch layer, taking care to keep it away from the plant’s central crown. In addition the mulch will help to suppress weed growth, keep soil temperature even, and eventually decompose releasing nutrients into the soil. 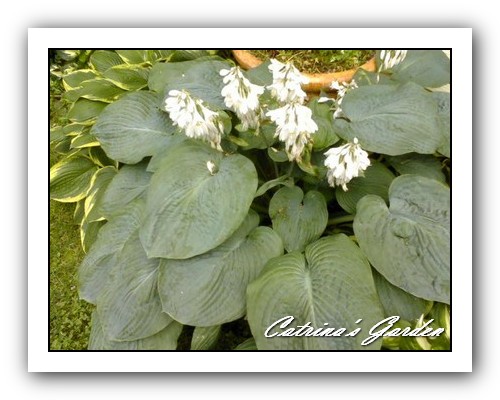 As mentioned earlier some people like to cut off the flower racemes. Why not try leaving them to see what the flowers look like. Some are actually quite nice. Others are also quite fragrant. Please be careful if you get your hostas from multiple sources and big box stores. There is a virus out there called “Hosta Virus X”. You cannot always tell right away if your plant has this but you can spread it with your 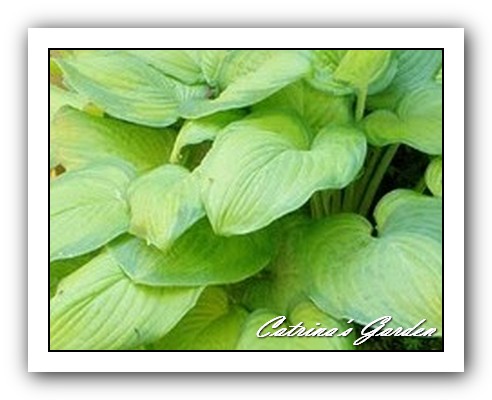 pruning shears. If you must trim, please wipe your blade with bleach between each plant. For this reason I also recommend not routinely cutting off the foliage at the end of the season. If you wait until after a good hard frost the foliage will die down completely and then you can just lift it off. If you get snow early this can also be done in spring. This method is actually much easier too. The only sure way to tell if your hosta has this virus is with an expensive test; however, some symptoms of virus include yellow or spotted foliage and dwarf, irregular or disfigured leaves. It’s really hard to tell though, and sometimes these same symptoms can be due to physical injury, drought or nutrient problems. Just play it safe and don’t go from plant to plant with your pruner.

To view all of the hosta offered by Catrina’s Garden click here.