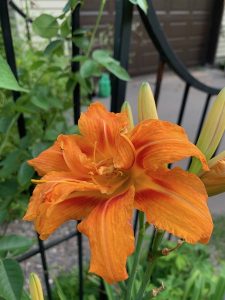 Variegated Kwanzo is unregistered, although it is historic as it was developed from a sport by the father of modern daylilies.  It is a 3 foot tall mid to late bloomer with a three inch, hose-in-hose, double orange/red flowers.  It’s main attractions is the variegated leaves (striped with white or cream).  The plant is also unusual as it is a triploid (this means it has three sets of chromosomes where most have two or four).  This makes it sterile but don’t worry, this plant has the ability to spread by runners.  I would not recommend keeping it in your regular daylily beds.  It is not as aggressive as the green form which has become a “ditch lily” in some places, but, do remove any plants that revert to green as they will spread faster.  The variegation is different with every scapes, some are even pure white.  Keep the ones that are interesting and get rid of the rest in a way that they won’t spread into the wild.  We don’t ship this one early in spring because we want to make sure that each fan that we send has nice variegation.