This hosta is one of the standbys of the Hosta world and much mystery surrounds the history of this plant.  Many millions of people have it in their gardens so naturally regional variations exist and then are moved around the world. I believe this to be the most “shared” plant of all time. Back in the 21st century these were among the first hostas available and many plants were said to be part of the species “fortune”, but were actually unrelated.  This group of green cultivars and variegated sports has now been renamed as multiple different cultivars.  To add to the confusion these plants have been sold under a variety of different names over the years, some “correct” and some not. Most of the sports are protégé of “Fortunei Hyacinthina”. There were so many of the similar looking and sometimes unrelated sports with white margines that eventually they were sort of grouped together under the name of “Fortunei Albomarginata” or “Silver Crown”.

Dark to medium- green, ovate, leaves, usually about 10 x 7” have an irregular wide white margin. This plant grows extremely fast and so is great for massing.  You often see them alternating with dark hostas. Mature plants form draping mounds 2 feet wide by 1 ½ feet tall that can take a half day of sun. 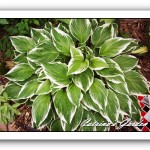 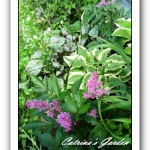 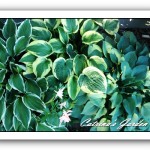 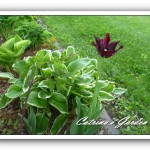