This historic heirloom became popular in the 40’s, and was one of the most popular irises of the time. A beautiful Tall Bearded Iris with snowy white standards that provide a striking contrast to the ultramarine falls. The picture is finished by white piping that brightens the margin. They have a light sweet fragrance when they bloom in early June.  Winning the Dykes Memorial medal in 1940 is what really kicked off their popularity. This extremely vigorous variety is great because it will continue to bloom even if it becomes overcrowded.  Wabash is from Indiana where the Williamson’s owned the Longfield Iris Farm, in Bulffton Indiana. This Iris is named after the Wabash River and there is a town of the same name. The river was named for the Indian name Wa-ba-shi-ki which means “bright white”. The Iris farm closed in the late 1950’s, but if you are in Indiana be sure to see the Williamson/Cook Memorial Iris garden.

Bright Hour looks a lot like Wabash, but does not have the reddish purple flushing of the foliage at the base. 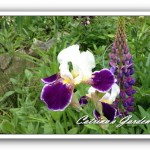 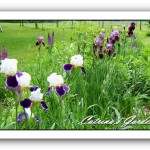