This historic miniature tall bearded iris is a sport of Honorabile. It was originally registered as TB but today is considered MTB. The standards are both white and yellow but are irregularly splotched and streaked, with no two being the same pattern.  The falls too can differ in their color and pattern but are usually splashed with yellow, purple, and red; the coat of many colors. This type of pattern is called a “broken” pattern. The beards are lemon yellow.  It stands about 20 inches tall and is a mid-season bloomer. Although it has been around since the 1930’s it was not introduced until 1989 by A. Katkamier. It is a fast grower and is very hardy. This iris was mixed up while naming in the 30’s with Kaleidoscope.  That one also has a broken pattern but is a little more yellow in general. For this reason you will sometimes see it called Joseph’s coat Katkamier. 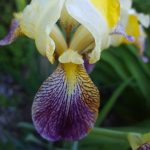 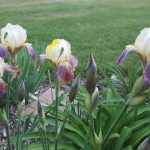 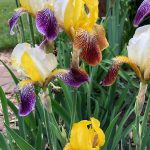 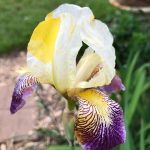